Of Serpents and Sirens: Rare Eileen Gray Chair on the Block at Christie's

Months ago I heard that famed art deco dealer Tony Delorenzo had agreed to a single owner sale at Christie's. I was left to venture a guess as to what treasures he had left in order to entice the venerable auction house into offering him a coveted evening sale. This is of course the Tony Delorenzo who privately sold Ruhlmann's fabled "Donkey Cabinet" which was the centerpiece of the grand salon of the Hôtel d'un Collectionneur at the 1925 Paris exposition. I was more than pleased to hear that it would feature the Sirène armchair by Eileen Gray. The catalogue has not yet gone to press and no image has been released thus far, but you my dear readers shall benefit from my research. 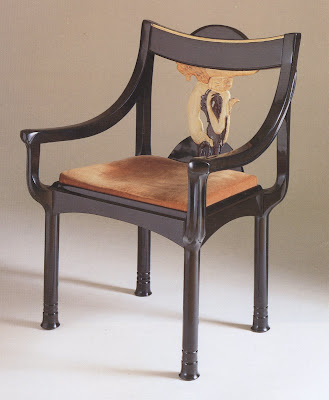 Photo: Sotheby's
The lot can be none other than the Sirène armchair which last appeared on the auction block in 1989 at Sotheby's when it was part of the now famous "Philip Johnson Townhouse" sale. The sale was in-fact the amazing art deco collection of troubled antiquities dealer Robin Symes. At the time the chair was thought to be unique and with its stellar provenance sold for a then staggering price of $209,000. Stylistically the piece relates to Gray's exotic period prior to the first World War, a period where she experimented heavily with lacquers and claimed couturier Jacques Doucet as a client. With its seahorse clutching mermaid the chair is vaguely Asian and western with a dash of Egyptomania. The chair was recorded as being sold from Gray's Paris gallery Jean Desert in 1923 to the singer Damia who was also romantically linked to the artist. Damia kept the piece all her life and it was sold from the auction of her estate in 1978. Considering the resounding success of Gray's Serpent/Dragon chair from the estate of Yves Saint Laurent the current lot seems set to fly at an estimate of $2-3 million. 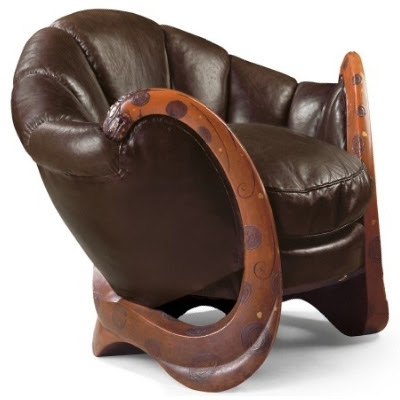 Photo: Christie's
In fact, the four Eileen Gray lots in the Saint Laurent sale each performed in the low millions except for the Serpent/Dragon chair (above) which brought an insane $28.2 million. I have had to explain this result endlessly and will not engage in that tired tirade here. As pointed out above, the Sirène armchair was (until very recently) thought to be unique...until six others appeared on the market and were sold as successive lots at Camard in Paris, June 1, 2005. 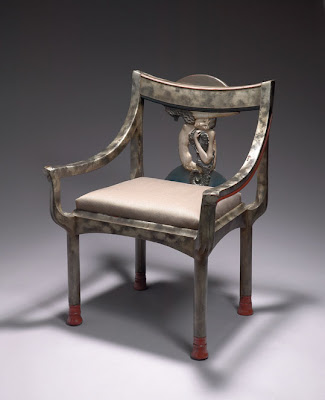 Photo: Camard
The lots were believed to be a suite of dining chairs, again for the songstress Damia and collectively brought in a staggering €8.9 million establishing a record for the artist to be smashed later at the YSL sale. The French press noted at the time that four chairs were purchased by Galerie Vallois and the remaining two went to a private collector. Their exact link to Damia is lost having been rediscovered via inheritance in 1997 with no apparent provenance left behind (its a wild story, read it here). It has been asserted that the specialist for the sale, Jean-Marcel Camard, based the provenance solely on that of the known example currently on the block at Christie's. Nonetheless they are undoubtedly the same model, perhaps more tarted-up, but essentially the same. I prefer the sleek black example as it has an austerity and refinement that are almost haunting. Now to the sordid topic of coin...given how well exceedingly rare works have been performing this season, I feel that the chair will sail past its $2-3 million estimate with the hammer settling somewhere between $5-7 million. We will have to wait until the evening of December 14th for our answer.
UPDATE:
I attended the Macallan Whiskey/ Lalique charity auction at Sotheby's this week and got some clarification from an industry insider. According to my source apparently the six chairs sold by Camard were later deemed to be fake. I have found nothing in the press to confirm this but it seems likely as they have never surfaced in the past five years and are not going to be listed in the forthcoming catalogue raisonne. The catalogue for the Delorenzo sale has come out and every indication is that this is the only example of the model...how exciting!
UPDATE II:
I attended the evening sale session and sadly this Eileen Gray masterwork failed to sell. It was devastating to say the least. Art professionals in attendance were in general agreement that the sale was a bit aggressively priced and unfortunately this chair was the major casualty of the day.
Posted by Patrick Sheehan at 2:24 AM