Feeling restless yesterday I made the trek out the Brooklyn Museum to spend the afternoon gazing at art with an old friend. I shamefully must admit that it had been the better part of five years since I made the sojourn to this renowned institution. While winding through the decorative arts galleries I was pleasantly confronted by a particular old favorite. I present the Moorish smoking room from the John D. Rockefeller house formerly at 4 West 54 Street in New york city (currently the site of the MOMA sculpture garden). 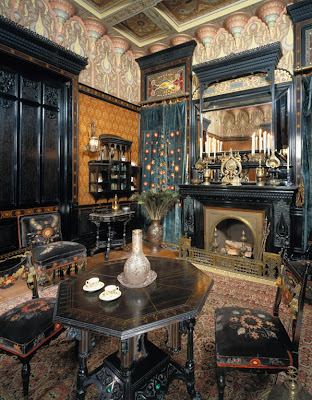 Photo: Brooklyn Museum
This sumptuous room was actually decorated in 1881 when the home was owned by Virginia native Arabella Duval Worsham. In 1884 Arabella married Collis P. Huntington and sold her home fully furnished to John D. Rockefeller. The home was changed very little and stayed virtually intact until his death in 1937 when it was subsequently razed. 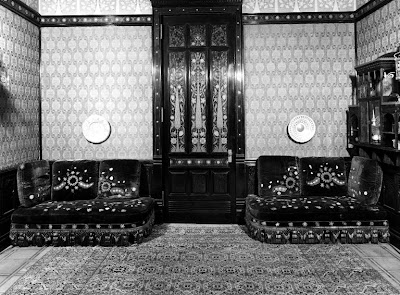 Photo: Brooklyn Museum
The room reflects the 1870s/80s interest in Orientalist art and the "exotic" decorative vocabularies of the Near and Far East. Moorish/Turkish smoking rooms were largely the domain of men and were a room to retire to and smoke, which at the time was still a rather exotic habit. While the overall result falls somewhere between Victorian opulence and pastiche, the designer had first-hand knowledge of Islamic decorative motifs and it rings true in the details. As an aside, it has been long accepted that the room was produced by the firm of Pottier and Stymus but recent scholarship has shown other hands may have been at work. 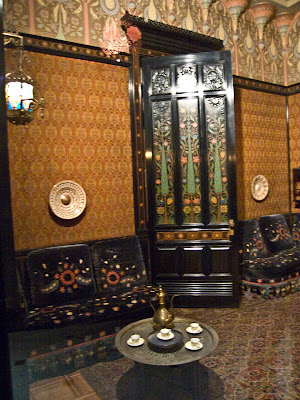 Photo: Wiki Commons
Looking at the room again after so many years I honed in on the stylized cypress motif on the back of the ebonized door. It immediately reminded me of another important commission out on Long Island. I present the fountain court from Louis C. Tiffany's country home, Laurelton Hall. 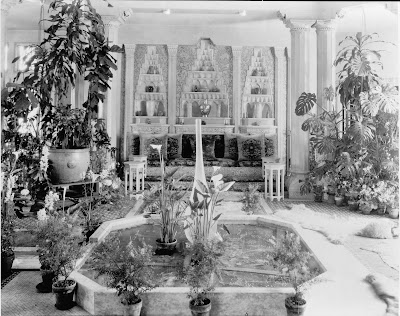 Photo: Old Long Island
From the style and placement of the interior fountain and the three stylized niches in the distance it is clear that Tiffany was looking to the Alhambra fortress or other similar icons of Arabic design. 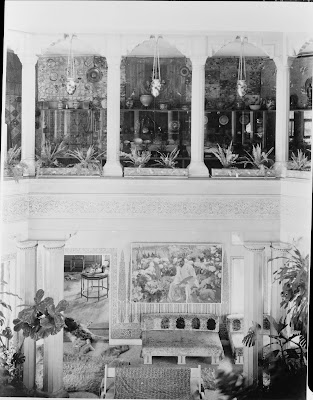 Photo: Old Long Island
It is the similar cypress tree stenciling along the lower level of the court that stuck-out in my mind when viewing the Rockefeller smoking room. 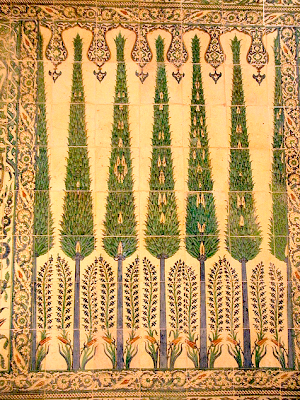 (L) Photo: Mark Twain House and Museum. (R) Photo: Sfrajan via Flickr
The catalogue for the Laurelton Hall exhibition at The Metropolitan Museum of Art points out that Laurelton's cypress stenciling (at left) closely copied the wall tiles (at right) from the Harem in Istanbul's famed Topkapi Palace. In Near Eastern cultures the cypress is symbolic of the universe and as an evergreen it represents immortality. This careful adherence to detail is compelling and while the overall desire was to create a luxurious fantasy there was some effort made to "get it right". Some ventured further to take decorative veracity to a whole new level. 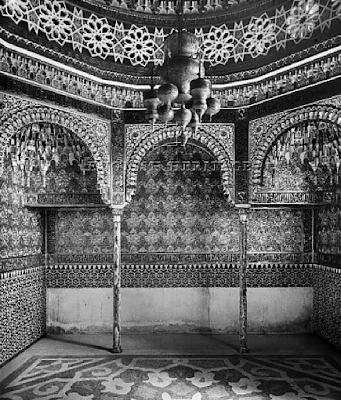 Photo: English Heritage
Enter the Moorish smoking room from Rhinefield House, Brockenhurst, England. This room was devised in the late 19th century by the Lady of the house, Mrs. Mabel Walker-Munro, as a gift for her husband. Evidently the couple had honeymooned in Spain and were quite taken with the Alhambra Palace in Granada. Mrs. Walker-Munro enlisted her architect to hire Moorish artisans to craft the burnished copper panels and import onyx and tiles from Persia and other parts of the Arab world. The result is a stunning microcosm of Islamic design tenents and is affectionately referred to today as the "Alhambra" room. The manor house is now a hotel and this former smoking room is an opulent private dining room 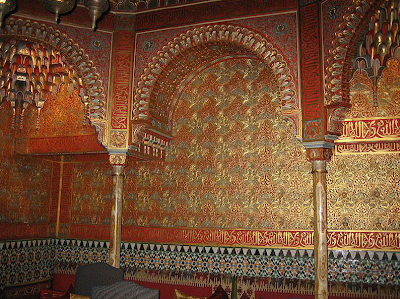 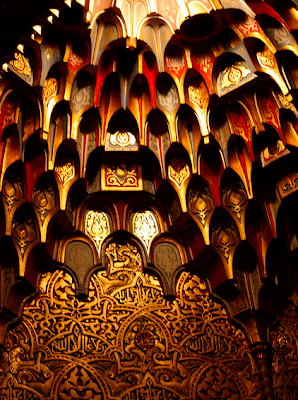 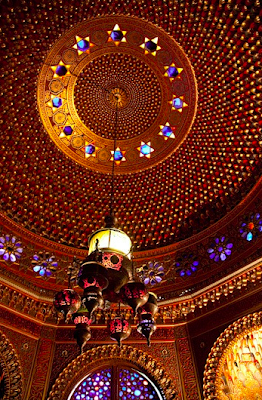 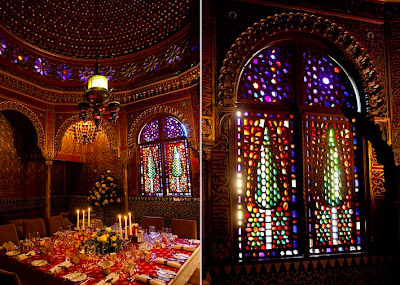 Photo: Amy Wass Photography
Again in the stained glass window we see the enduring cypress motif. This space is truly jewel-like and a decadently rare survival.
Posted by Patrick Sheehan at 7:28 PM