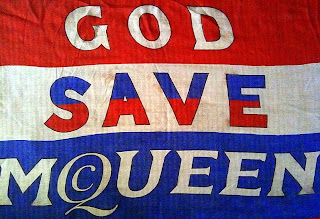 I like many was stunned today to hear of the passing of fashion superstar Alexander McQueen... apparently by his own hand. Many thoughts swirled through my mind in terms of his vision and what will now become his legacy... There has always been a dispute regarding what is high art, decorative art and (gasp) fashion, but at the end of the day art is transformative, changing how we see ourselves and the world. To distill it into an object I would look back to McQueen's shoes from last season... 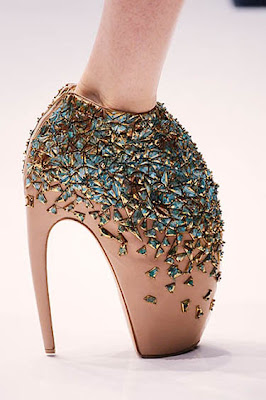 This particular pair moves somewhere between beauty and the macabre. Sleek and bejeweled while sinister, transforming the model into a towering clawed glamazon. The result is akin to folly but brings a feeling of sheer delight. Naysayers will find fault with anything but also fail to embrace fashion's long ties to surrealism. Enter Elsa Schiaparelli and her infamous shoe hat and lobster dress.

In terms of "high art" (ahem) the correlation I make is to the glass high-heel appendages Matthew Barney had crafted for Aimee Mullins for his Cremaster Cycle. Mullins who herself modelled for McQueen, FYI. Barney's appendages create an air of power and modernity, transforming Mullins into a futuristic superwoman. 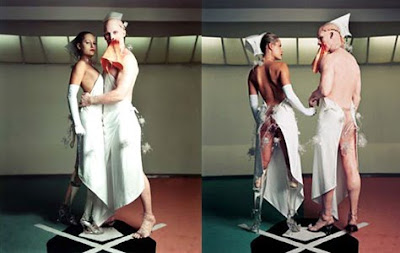 If I had to venture a guess we will see retrospectives of McQueen's work at the Met or the V&A within the foreseeable future. We shall leave it to the curators to to draw the deeper comparisons about McQueen's oeuvre, until then we will feel the void.
Posted by Patrick Sheehan at 11:32 AM