While distracting myself from the tasks at hand, I decided to review Wright's March Design Sale. Considering the economy, it is a fairly solid showing of 20th century design staples but nothing really sets the the world on fire in my opinion. It is of course a "mid-season sale", and like Christie's and Sotheby's, this sort of sale tends to be less earth-shattering and more about clearing previously unsold property and lower-profile consignments. That said it is a great way to get deals on standards while you wait for the more "important" (ahem) sales. I was however delighted to see this lovely little toast/letter rack by Christopher Dresser. 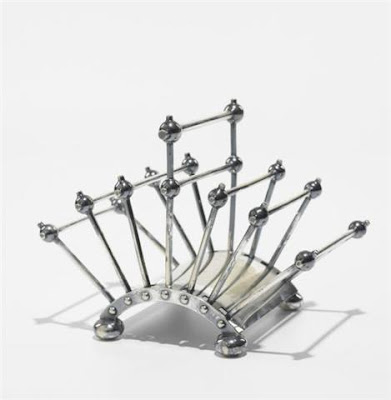 This piece is inserted right in the middle of the art deco section of the sale despite the fact that this design surprisingly dates to 1878. Dresser was a well versed exponent of the revival styles of the Victorian age but was capable of being forward-looking to which his metalwork designs can attest. 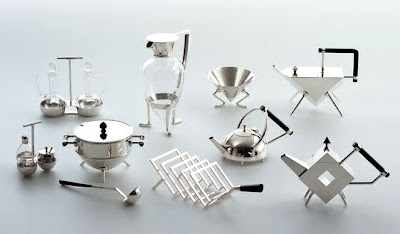 While the forms flirt with Japonisme, they are distinctly anthropomorphic and futuristic owing to the fact that he embraced industrialization. The tureen and claret jug have always seemed to be capable of lift-off while the footed vessels appear to be waiting for the lights to dim so they can make a quick escape. It is hard to believe we are looking at designs from the 1870s-80s. These works were conceived nearly a half a century before their time. The toast rack at Wright's is priced at $1000-1500 which seems a bit high as it is a silver-plated brass example. Electroplated examples tend to sell in the $600-800 range while the solid silver examples tend to go in the mid to high 1000s as seen in a recent example sold at Christie's South Kensington. We will have to wait and see how this beauty performs...
UPDATE: Well the auction came and went and I feel vindicated in my assessment. The lot reached around $700 ($938 with buyer's premeium) which is where a plated example should fall...
Posted by Patrick Sheehan at 9:52 PM