On a recent escape from the gray winter doldrums I found myself in Winter Park, Florida. Being in the "art biz" I had been told for ages to take in the extensive Tiffany Glass collection at the Charles Hosmer Morse Museum and I am very glad that I finally made the trek. Around every corner were "old friends", Tiffany works that I had seen published many times over the years not always noting where they were located. To call the collection encyclopedic barely does it justice. One of the many works that stopped me in my tracks was an extremely rare "pebble" window executed by Tiffany studios in the 1890s. 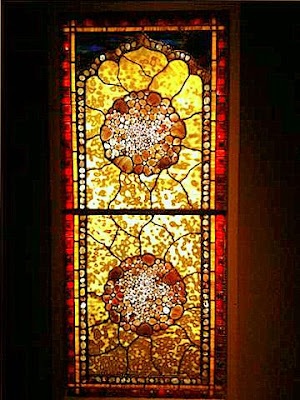 The window itself was executed for the house of Joseph Briggs in Jersey City, New Jersey. Briggs was one of Louis C. Tiffany's most trusted workman and is the person who is often credited with these obscure glass and pebble confections. The crystalline pebbles of the border and the central clusters are arranged and graded in such a way as to make the semi-precious stones transcend into almost jewel-like qualities. In the past these rare pebble works were considered more of a curiosity, an eccentric offshoot of Tiffany's core business. However, very recently serious Tiffany collectors have snapped-up a related window and an orientalist dream of a table lamp both of which were sold through Sotheby's. 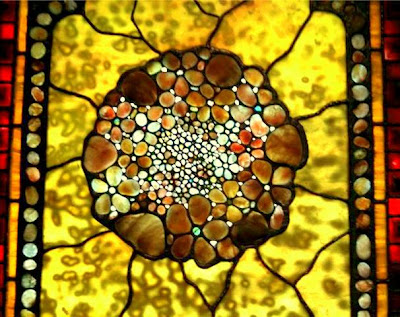 This detail from the Briggs window shows the subtle grading and tonality of the stone selection. This was no small feat and was achieved through the craftsman's adept skill and slight-of-hand as the tiniest "pebbles" forming the center are actually rendered in faceted-glass effortlessly blended into a cohesive composition. This blend of faceted-glass and pebble work is seen most closely in the Sotheby's lamp noted above. While the result does not suit all tastes the survival of these decorative oddities stand as a testament to Tiffany's genius.
Posted by Patrick Sheehan at 10:40 PM