This is one of my favorite Ephemeral Films from the Prelinger Archives. It is a ten minute mini-feature created by General Motors to capture and promote the 1956 "Motorama" held at the Waldorf Astoria Hotel in New York. It is a visual feast that can be dissected on so many levels: fashion, gender roles, automobiles, fairs etc. If you set aside the now classic cars and "new look" ensembles it is the styling that really captivates me. The main stage with its white pylons and arches is purely Eero Saarinen in feeling and perhaps in truth. Saarinen had just completed the G. M. Technical Center campus in Warren, Michigan and the look is very much related to his groundbreaking design for Dulles Airport in Chantilly, Virginia which was completed a few years later. My obsession comes at 3:20 with the unveiling of Frigidaire's "Kitchen of Tomorrow." 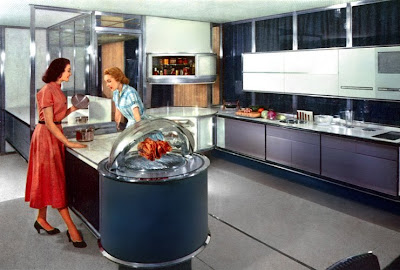 Frigidaire was actually owned by G. M. in 1956 and the styling department took over this futuristic vision of what the home kitchen could be complete with prototype appliances. The installation comprised a sleek open plan with an interactive recipe file, marble topped induction cook surface, ultrasonic dishwasher, clear domed in-counter oven, and the unforgettable push-button magic of the circular glass "Roto-Storage Center" refrigerator/freezer. It would inspire anyone to to rise to culinary heights, but perhaps in a bit less chiffon.
Posted by Patrick Sheehan at 9:50 PM