As the adage goes "one must be in the right place at the right time." No truer words were spoken and I have encountered endless "pickers" who have made a livelihood through a combination of luck and guile. A "picker" is an intermediary dealer that combs the countryside to snap-up under-catalogued items as they pass anonymously through hasty volume sales of every sort. The "picker" usually unites the obscure item with its authorship and/or provenance and passes it on for a tidy profit. Much to my chagrin I must introduce Exhibit A: 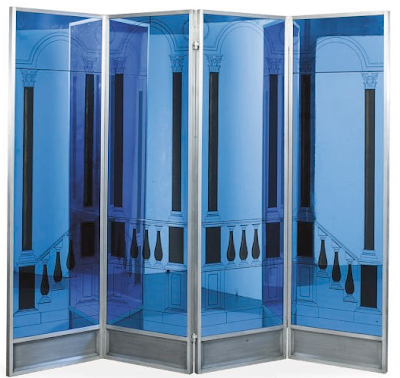 This deliciously architectural Art Deco screen was offered amidst hundreds of other lots in Christie's New York January Interiors sale. I only discovered its existence a few weeks ago while perusing the back catalogue bins at the Strand and my heart sank (as is usually the case in these instances). The lot was simply described as an "Art Deco Aluminum and Colored Glass Four-Panel Screen" and sold for a mere $1250. I knew from the tattered catalogue exactly what I was seeing... I introduce Exhibit B: 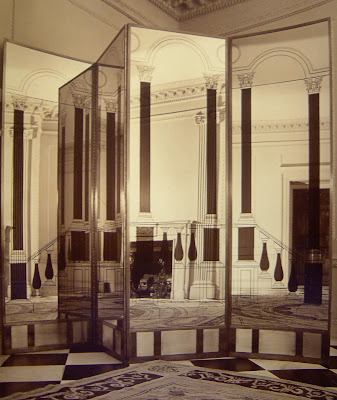 This virtually identical screen was created ca. 1930 for the first Mrs. Vincent Astor (Helen Dinsmore Huntington) by her brother-in-law the South African artist Jan Juta. Jan Juta is best known as a muralist and illustrator who was a close friend and collaborator of D. H. Lawrence. A portrait of Lawrence by Juta hangs in the National Portrait Gallery in London. Juta was the fortunate heir of a publishing dynasty which allowed him to develop his art and travel the globe in the process, spending most of the early 1920s on the Riviera. It was in Eze that he painted extensive murals for the chateau of American composer Samuel L. Barlow. This was quite fortuitous as Barlow's wife was a society decorator under the professional name of Ernesta Beaux. She hired him to craft the extensive glass murals present in the lobby she created for the fabled River House in New York City. (If you have not read Michael Henry Adams series on the River House over at the Huffington Post do so at once...it is a must.) 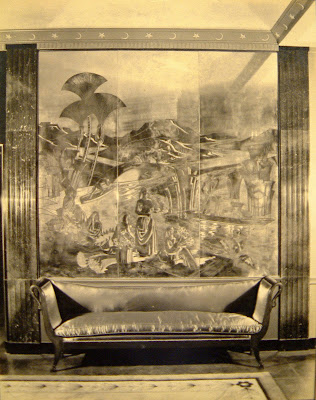 It is likely that Mrs. Barlow assisted Juta with his entree to New York society, regardless, in short order he opened a New York studio and began a prolific career as a muralist/designer and regularly exhibited his decorative works. 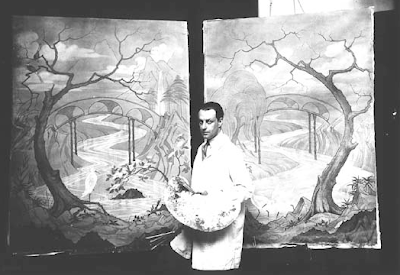 This circa 1929 image of the artist in his studio shows him at work on a series of japonisme panels destined for the townhouse of Schuyler Parsons at 49 East 72nd Street (demolished 1959). 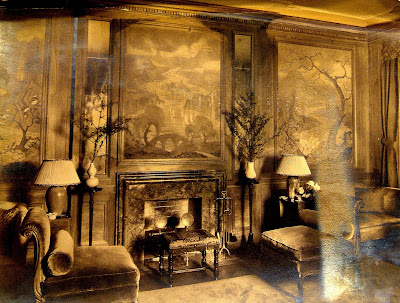 Juta contributed to the decoration of the RMS Queen Elizabeth and to the United Nations headquarters, remaining in the United States until his death in 1990. Whoever was fortunate enough to purchase the Jan Juta screen at a fraction of its $2000-3000 estimate is quite lucky in my book. Provided further context and provenance research it can be passed on for five to ten times the auction price... Oh well, you can't win them all. On to the hunt!
Posted by Patrick Sheehan at 1:33 AM 1 comment: 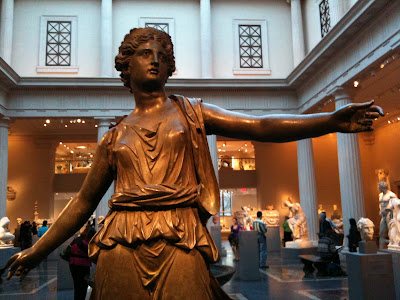 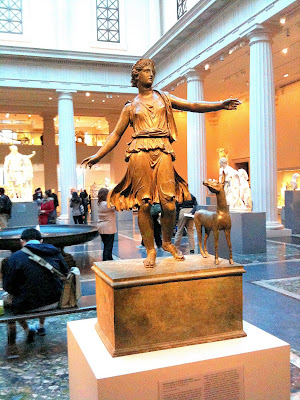 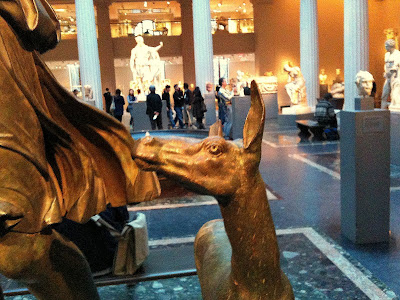 Posted by Patrick Sheehan at 10:41 PM No comments: