I was away for a few weeks recharging and cannot believe the summer is rapidly drawing to a close. While on vacation I got the idea for this post over a dinner conversation about style icons and fabulous things...naturally. I recalled the extravagant former Harpers/Vogue editor Diana Vreeland. Now if for some reason this name escapes you please view this video and attempt to get up-to-speed. It was filmed on location in her Billy Baldwin decorated Manhattan apartment whose overriding red palette she insisted was based on a garden, "but a garden in hell." Like many women of high style she was not a natural beauty but through the subtle architecture of artifice, wit and social wisdom she became one of the preeminent arbiters of taste in the 20th century.

This imposing figure was the queen of the style one-liners such as "pink is the navy blue of India", "I loathe narcissism, but I approve of vanity", and "elegance is innate...it has nothing to do with being well dressed...elegance is refusal." After she passed in 1989 she had a small delicious Sotheby's sale crammed full of Beaton drawings, blackamoors and veritable bloodbath of red chintz furniture. If there was one offering in the catalogue that was too chic to pass up it had to be lots 62 & 63... her monogrammed Louis Vuitton luggage. 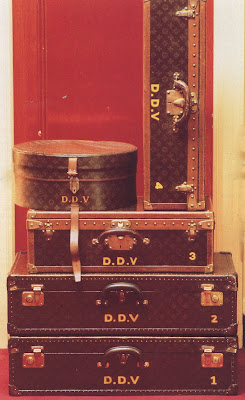 One imagines that fashionistas and editors out there would give their eye teeth to have one of these talismanic objects belonging to such an industry legend. The mind reels wondering where they are now, 21 years later...
Posted by Patrick Sheehan at 11:38 PM 1 comment: