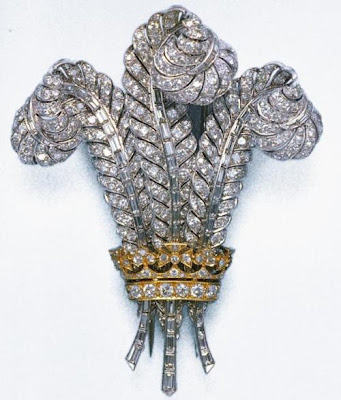 Now I was on the fence about this post for the past few weeks for a multitude of reasons. The brooch comes from the collection of Elizabeth Taylor and is one the centerpieces of tomorrow's sale at Christie's. Primarily the exposure was giving me pause, but it was more the fact that I could not find a period image of the Duchess of Windsor wearing it that stopped me in my tracks...selfish? Perhaps, but it always adds to the mystique of an object and makes these posts so much fun to write, but I digress... For those who missed it, the brooch was created in 1935 and was a gift from Edward, Prince of Wales to his paramour Wallis Simpson making it one of those talismanic objects that in itself symbolizes one of the greatest romances of the 20th century. 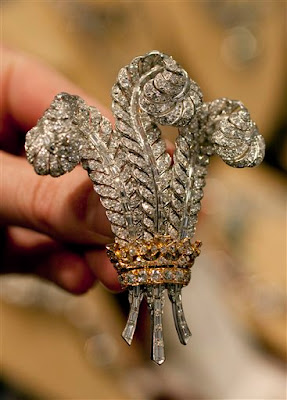 The three joined plumes are a symbol of the Prince of Wales, the heir apparent, thus this gift in a sense demonstrated the Prince's intention to make the twice divorced Wallis Simpson his queen. It is the stuff of legend but it is a bit clouded as I have heard that it was given to Wallis in 1935 and conversely in 1955. Either way it is still a romantic notion. As the story goes, Elizabeth Taylor and the then Duke and Duchess of Windsor moved in the same circles and Elizabeth admired the brooch to the extent that Richard Burton asked the Duchess if he could copy it for Liz....the stylish Duchess agreed. However, a copy was never made. 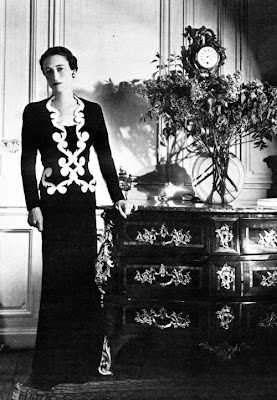 After the Duchess died in 1986 her legendary jewelry collection was sold at Sotheby's Geneva the following year to benefit the Pasteur Institute. The legend goes that Prince Charles was part of the bidding war for the piece which was ultimately won by Taylor, bidding via telephone poolside from her home in Los Angeles...naturally. At the time she paid $449,625, so it seems a bargain at the present estimate of $400,000-600,000. I am guessing that it will break the million dollar mark given the success of the Duchess' other pieces that resurfaced last year. The piece now operates on many levels from Hollywood glamour to the centerpiece of legendary if not ill fated romances. I say that not to be melodramatic but I have always been haunted by this image of the bereft Wallis peering out of a window at Buckingham Palace after the Duke's funeral. 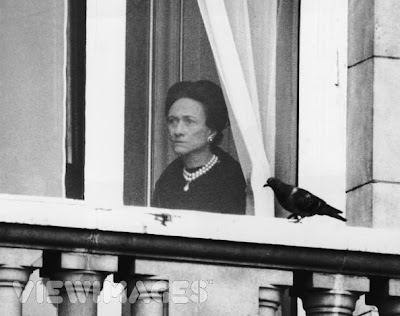 To add insult to injury the rest of the royal family decamped to Balmoral and left the Duchess to her own devices. The lost look in her eyes brings home her most famous quote "you have no idea how hard it is to live out a great romance..." Hopefully the brooch will find its way to the epicenter of another great romance... Until then we wait...AR

UPDATE:
Well, the important jewels session one just concluded. It took four and a half hours to sell a mere 80 lots in an industry that usually sells between 80-100 lots in an hour. This is a testament to the interest in the sale. The Prince of Wales Brooch performed as I suspected breaking just over a million dollars achieving $1.3M with buyers premium. The press release has yet to be issued so there is no telling what disclosures can and will be made. But this I do know, the brooch sold via telephone with an Asian Christie's representative named "Mei-Mei". So the brooch may be heading East. Hopefully we will know more soon. --AR 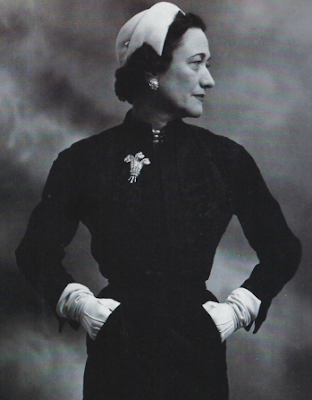 Thanks to Interior Design Hound a period image has finally surfaced online...whew!
Posted by Patrick Sheehan at 7:10 PM 6 comments: