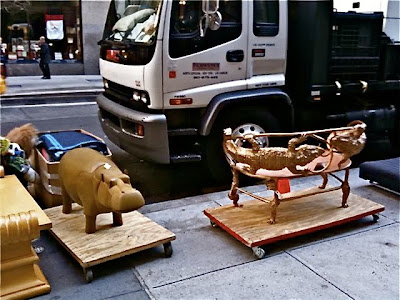 One of the top Lalanne lots on the street in Rockefeller Center awaiting the trek to the warehouse
Ok, I know I have been beating a dead horse (elk, rabbit, hen, hippo...) with my doubts regarding Christie's Design sale offering 52 lots by the whimsical Lalannes. Well the results were explosive to say the least with a few lots reaching ten times the low estimate. All but two of the lots failed to find buyers contrary to what ArtInfo published after the sale. The two highest lots knocked down at $400,000 ($482,500 with premium) each against considerably lower estimates. They were a dramatic crocodile settee (est. $100,000-150,000) and a ginko coffee table (est. $40,000-60,000).
The auction room was abuzz with prospective buyers and the phone banks were full of Christie's staff bidding in many languages. With the wane of interest in works by Marc Newson, George Nakashima, Zaha Hadid, Ron Arad etc. it seems that the Lalannes are the "it" artists to collect and speculate upon at the moment. Surprisingly, amongst the bidders in the room was real estate enfant terrible Michael Shvo. He and his entourage managed to snap-up two sculptures amidst heavy bidding.
Offering so many lots by one artist is a calculated risk that definitely paid off for Christie's. Art world cognocenti are saying that the single owner portion of the Lalanne run came from a gallery's stock which is usually a disastrous proposition, but in this case not so.....not by a long shot.
As a post script it is very telling that the final lot of the sale the Voronoi Shelf by Marc Newson knocked down at $125,000 ($152,500 with premium), shy of its $150,000-200,000 estimate. The buyer was the sole bidder participating via telephone and bidding against the reserve, ouch.
Posted by Patrick Sheehan at 7:54 AM