I know that I have rattled on in the past about the treasures produced by Tiffany Studios. In decorative arts circles people are sharply divided when it comes to these artful commodities. One camp appreciates their mastery as genius...the other camp sees them as gaudy, Victorian holdovers and would prefer that they were part of a man-made reef system for an eroding coastline. Harsh, but I have heard the arguments trust me on this. Among the various models the monumental Wisteria is about the most iconic and a serious Tiffany collector would be remiss not to have a "good" example in their collection. Now when it comes to what is considered "good", opinions vary, but financially there is a striking trend that shows where tastes lie...the bluer the better. Louis C. Tiffany prided himself on faithfully capturing the subtle tonalities of the Wisteria in bloom, a bloom that ranges in tones from soft blue, pink and peachy white. So it begs the question: how many saturated cobalt blue Wisteria have you seen in nature? 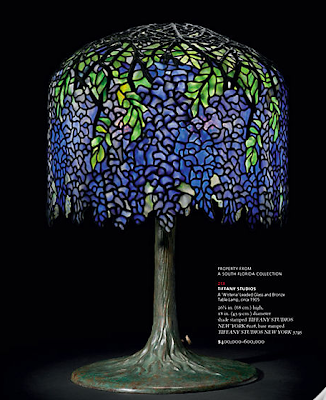 Christie's New York, December 15, 2010, lot 218 (est. $400,000-600,000) Sold: $842,500
This example currently on the block at Christie's is truly what collectors are seeking, a rich, deep and saturated blue...so much for nature. It is striking and pleasing to the eye for sure. Similar examples in recent years have reached over the $800,000 mark at auction so this estimate would seem conservative. One will have to wait for the exhibition to see if the image is more juicy than the reality and of course mull over the condition report. If it is as sexy as pictured expect to see a very high price. 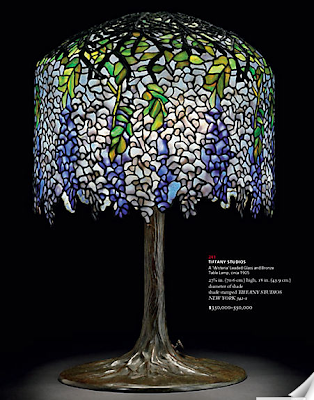 Christie's New York, December 15, 2010, lot 241, (est. $350,000-550,000) Sold: $482,500
The next example as you slide down the desirability scale are what people in the "biz" call the "striped" variety. There is a bit more of an attempt to capture the variety of nature with its subtle parchment-pinks, greens, lilac-creams and STRIPES of saturated blue. These examples vary wildly and I have seen them striped in deep pink, mint green and even yellow tones...but again blue is the pinnacle. 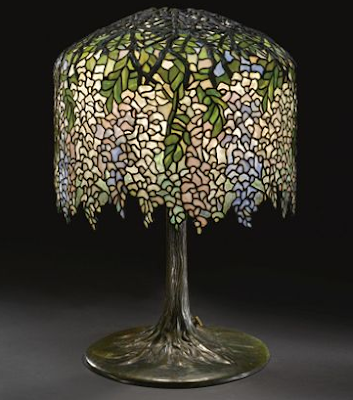 Sotheby's New York, December 18, 2008, lot 182 ($182,500)
Now as we move further away from the "best" you will note an increasing adherence to the more subtle tones found in nature. This example while soft and muted was a stunner but from the sale price you can clearly see where it falls in the hierarchy. 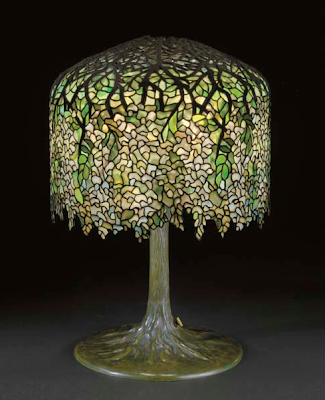 Christie's New York, June 13, 2006, lot 34 ($156,000)
This final example while masterly crafted is beyond subtle with its mostly parchment hued tones. I have actually seen examples of this category in nearly pure white and while visually striking they transmit too much light and and must be dimmed to subdue a harsh glare akin to an exposed bulb. The model itself takes four bulbs so finding the balance is always tricky even in the "best" examples. I always tell clients to "buy what you like" as decorative arts are generally lived with and lets face it even a drab Tiffany lamp (in good condition) will at the very least hold its value and accrue over time. With Christie's offering two Wisteria this season we will have to wait a few more weeks to see what Sotheby's has in store. Hopefully the Wisteria market won't be too flooded which could split the pool of prospective bidders as I would love to see the saturated example at Christie's go the distance.
Posted by Patrick Sheehan at 8:53 PM