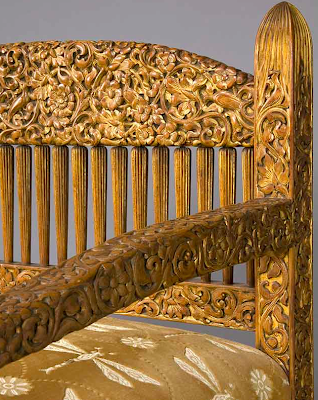 Image via Doyle New YorkHello Dear Readers. Just a quick post this time but it is of the utmost importance. Thanks to an old colleague I was tipped off to this rare treasure that is slated to sell tomorrow (Feb. 8th) in Doyle New York's Belle Epoch auction. Let me introduce you to the Indian inspired carved wood settee crafted by Louis Comfort Tiffany for the music room of the H. O. Havemeyer house at 1 East 66th Street. 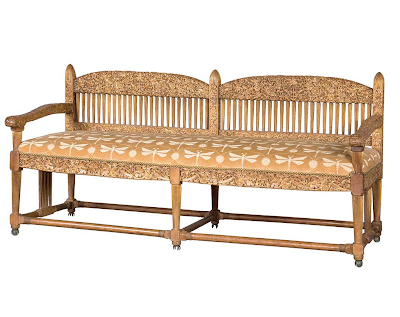 Image via Doyle New York
The modern upholstery may leave much to be desired but you must think it away. The Havemeyer mansion was one of the premier aesthetic movement homes in America when completed in 1892. Tiffany planned every detail of the decor and the music room was no exception. 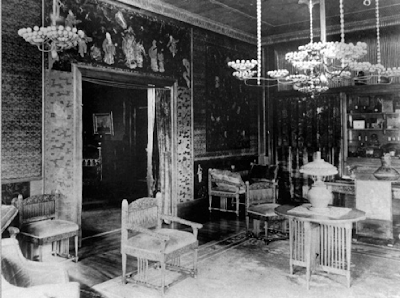 Period Image of the Music Room
Unfortunately the home was razed in 1930 and its contents were divided by the family...some of which were disbursed. Thankfully for us many pieces have made it into public collections. From time to time they do appear at auction, but usually at Christie's and Sotheby's. Don't get me wrong, Doyle's is a New York institution, but you would expect a lot of this level to command the cover of an important December/June design sale. It is quite puzzling. Perhaps the consigner wants to sell discretely but the motive is unclear at this point. 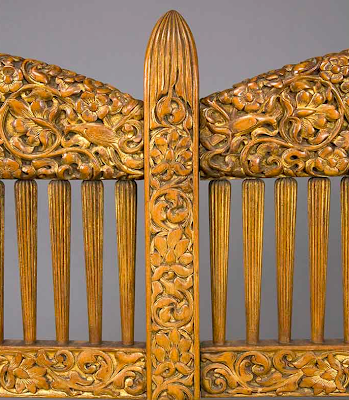 Image Doyle New YorkThe provenance shows that the settee descended in the Havemeyer family for four generations but there is no direct indication that it was consigned by the family. It is a bit confusing as that would only add cache to the lot. That said, I have absolutely no doubt that it will sell at its estimate of $125,000-175,000. If I were a gambling man I would guess that it will sell in the $250,000-300,000 range. But there is no telling. This work is so exceedingly rare that it could easily fly despite being discretely inserted in a smaller sale venue. Until tomorrow we wait.-AR

Update:
Well I was proven to be a bit too conservative in my exhuberence, perish the thought. The lot sold this afternoon for $422,500.00. It is no surprise because lets face it...where can you find another one in private hands? I will let you know if any further details surface.--AR

Update II:
Well that did not take too long. My contact at Doyle's confirmed that there were seven active bidders competing for the settee. The lot was won by the powerhouse art consultancy McClelland + Rachen bidding on behalf of a private client. They represent some of the best 20th century art collectors so I am not surprised by this news. Evidently the underbidder was Margot Johnson who featured prominently in a previous post about Herter Brothers. How exciting. Until next time.--AR
Posted by Patrick Sheehan at 6:27 PM