I have spent the past few days pouring over the June design sales and I was delighted to see that another "old friend" has emerged on the auction block. Now this is not something I have personally handled before but it is an object of great reputation and I am delighted that I will be able to see it in the flesh very soon. I present you with the "Jazz" screen comprised of reverse painted mirror panels by French artist Etienne Drian, currently on the block at Christie's. 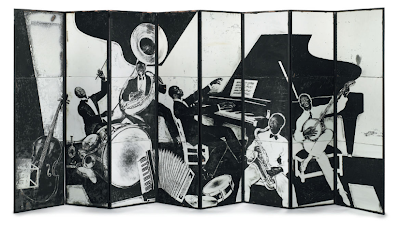 For those not in the know, Drian was born Etienne Adrien in 1890 in Bugneville, France and emerged as one of the preeminent fashion illustrators of the dress reform era. It was later in the 1920s and 30s that he expanded his repertoire to include portraiture, murals and decorative arts. 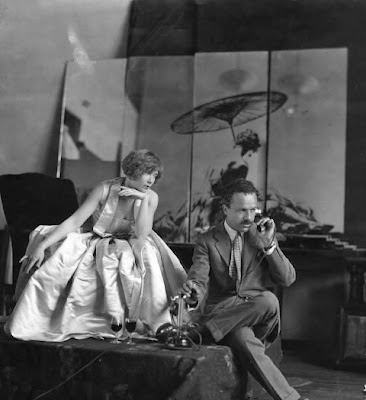 This image shows Drian in his studio circa 1930 with American actress Gilda Gray who popularized the "Shimmy" dance craze. Note the mirrored screen panels in the background awaiting completion. The "Jazz"screen originally decorated the music room of Mrs. Bradford Norman's apartment at the fabled River House which was published in Arts & Decoration (May 1933). 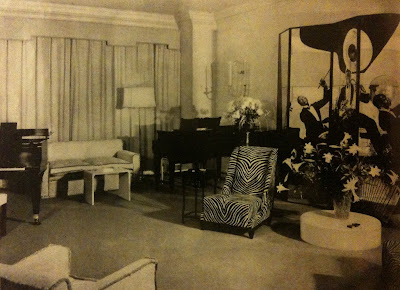 As you can see the screen held court along one wall and and provided an important backdrop for Mrs. Norman's concerts. The image below from Vogue (October 1933) shows the screen again as Mrs. Norman plays for Mrs. Averell Harriman, Mr. Edward McIlvan Jr. and Mr. John Kennedy. 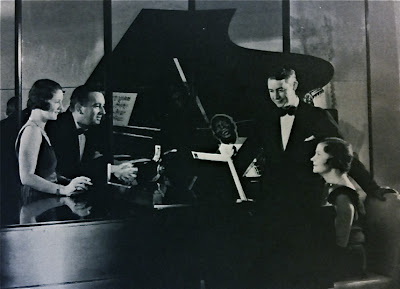 As you follow the Christie's provenance for the screen the next time it emerges is in the collection of New York fashion designer John Moore. Fortunately it was photographed in his apartment for a Life magazine piece in May of 1963. 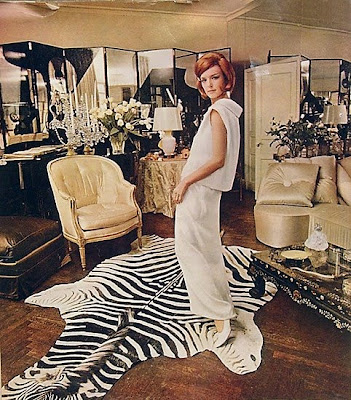 It seems that Mr. Moore used the screen in much the same manner as Mrs. Norman, an elegant backdrop amidst a sea of cream tones, zebra hide and a lacquered piano. The screen then passed to New York antiques dealer/designer Christopher Chodoff and was photographed in his home for Architectural Digest (May/June 1977). 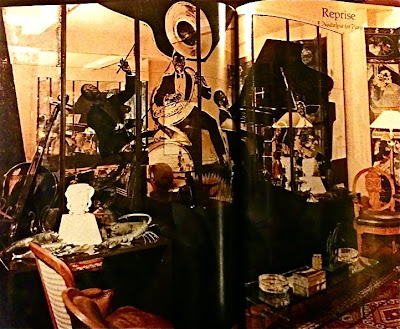 Mr. Chodoff's 1990 obituary noted that his antiques business opened in Manhattan in the early 1950s and that he was one of the first dealers to introduce modernist masterworks by Eileen Gray, Diego Giacometti and Jean-Michael Frank to an unsuspecting post-war American clientele. His companion at the time of his death was noted as a Mr. Maury Green and it is likely that the screen remained with him until now.

While the provenance is listed with confidence the lot essay backs away from it slightly noting that it was "likely from the New York apartment of Mrs. Bradford Norman" which is slightly annoying as it was definitely hers. There was possibly some reason for concern as the "Jazz" screen has a slightly more famous sister (below) that was executed for the ballroom/theatre of the Maharaja of Indore's art deco Manik Bagh palace. Images of the two have been interchanged for years but they vary slightly in the fine details. If you study them closely you can sort it out. 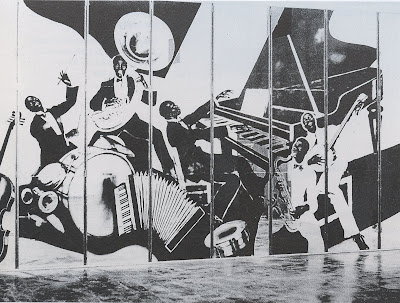 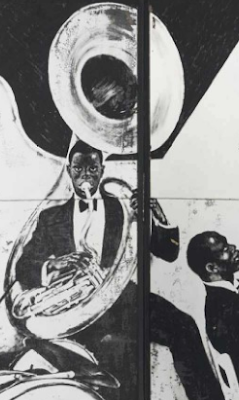 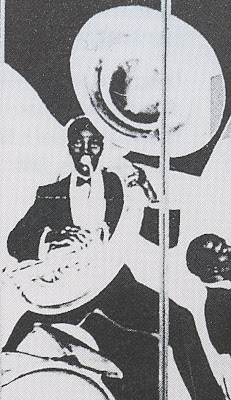 As you can see from the details above the join cuts through the tuba player's arm in two distinctly different places. The example at Christie's is definitely the "Jazz" screen from Mrs. Norman's apartment... no question about it. What has always struck me about the band depicted in the screen is that the players are highly individualized and not the typical exotic derogatory stereotypes of the Jazz Age. I always felt that the figures had to be based on real people and thankfully the experts at Christie's were able to unravel part of the mystery. 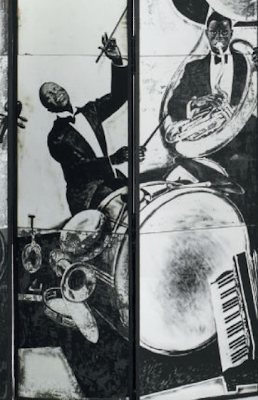 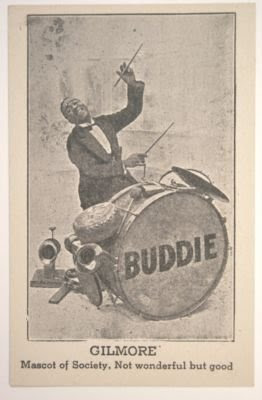 It appears that the drummer in the screen is directly copied from a Berenice Abbot photograph of jazz musician Buddy Gilmore. After World War I, Gilmore played the capitals of Europe and had lengthy stints at Parisian venues such as La Revue Négre. It seems fairly evident that Drian collected and composited a number of jazz musician portraits for his finished work. Further research will need to be done identify the rest of the players... perhaps for another post!

On a side note, it appears that Mrs. Bradford Norman was not the only Drian client at the River House, enter British lumber heiress Audrey Evelyn James... (if you are not familiar with the River House apartments please read Michael Henry Adams' series for the Huffington Post). The vivacious Audrey James was one of the "bright young things" in London society and was a favorite of the Prince of Wales. It was during her second marriage to department store magnate Marshall Field III that she resided at the River House and was published in Vogue (April 1934) with her Drian portrait screen as a backdrop. 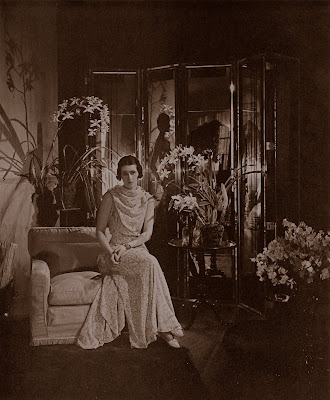 Her screen traveled to London after her divorce from Field and it was photographed by Country Life at her residence "The Holme" in Regent's Park around 1938. 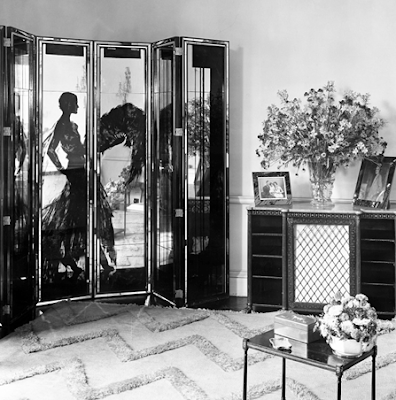 Luckily for us this art deco stunner survived and was sold at Christie's from the Estate of fashion PR legend Eleanor Lambert in 2004. 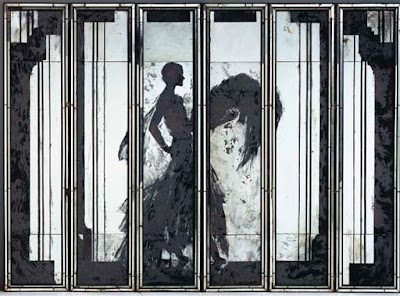 I remember seeing it at the sale preview and it was quite distressed but it still achieved nearly $22,000. But this lovely screen was not Mrs. Field's only Drian commission. It seems that she also hired Drian in 1932 to spruce-up her River House dining room with mirror murals much like the London music room of her friend Sir Philip Sassoon. Unfortunately no image survives but we know from the period press that the "mirrors are painted [with] the most wondrous collection of our feathered friends." It leaves the imagination to wonder....but fortunately for us this was an oft repeated Drian theme. 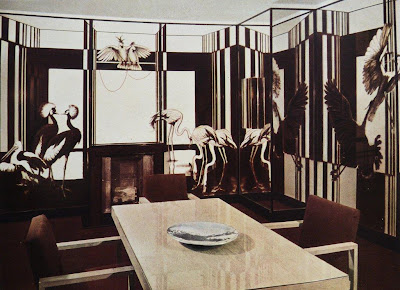 I present the mirrored dining room that Drian executed for couturier Edward Molyneux. This gives us a pretty clear indication of how the Field's dining room likely appeared. While ephemeral, some of Drian's murals were carefully dismantled and sold at auction so we thankfully have a sense of what they were like in person. 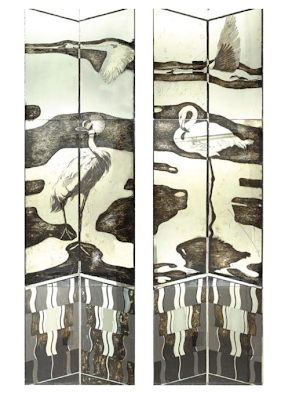 These are two of eighteen panels from the entrance foyer of Mrs. Randolph Hearst's residence at 300 Park Avenue executed by Drian between 1927-1928. Screens are easier to sell than sections of interior elements, Sotheby's sold this group in 2004 for a dismal $2700. What a steal! Even rarer are Drian's smaller decorative works... 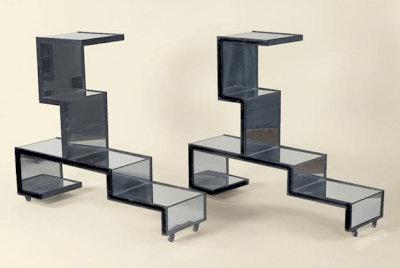 This unusual pair of Drian side tables were sold by Sotheby's from the collection of Karl Lagerfeld for a whopping €33,275. While rare, this model is by no means unique as evidenced by this example presently for sale at the New York gallery of Alan Moss. 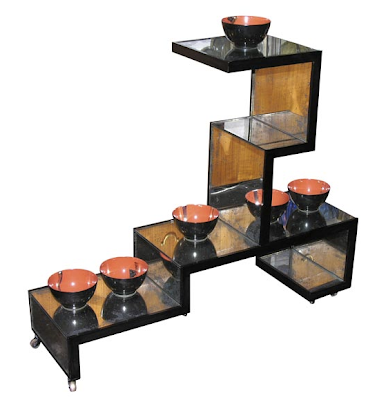 I seem to remember that dear Alan had a pair, perhaps one was sold...but I digress. If you are interested you can purchase it here. 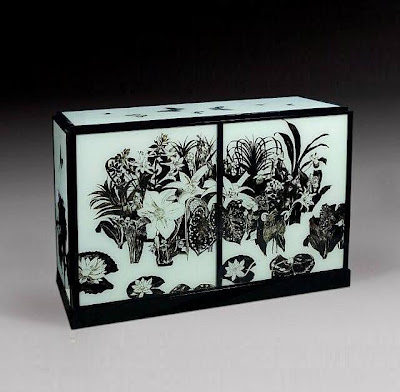 This unusual cabinet mounted with Drian panels surfaced at Tajan Paris in 2007 and despite its rather clunky presence it achieved €33,458. If you missed it, do not worry, it is now in the capable hands of Parisian art deco expert Felix Marcilhac and can be purchased here. 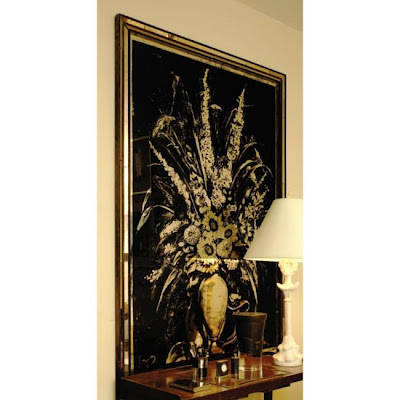 Last but not least is this lovely still life/mirror from the estate of fashion designer Bill Blass. These surface from time to time and can usually be had at auction for less than $5000 depending on their size. But it was likely the Blass provenance that led this example to sell for nearly $7000 at Sotheby's in 2005.

I did not intend for this post to be so encompassing but Drian is close to my heart. The "Jazz" screen will hit the block at Christie's on June 16th at an estimate of $100,000-150,000. We shall see how it goes, that price seems a bit steep given the form and its fragility. If it is an amazing success I am sure we will see the other "Jazz" screen re-emerge within short order. Until then dear readers...we wait.
UPDATE: The screen sold this morning just within estimate at $110,500. I was a bit concerned it would not after I saw the piece in person as the condition was rather rough, finely painted but flaking and distressed. Expect to see other Drian pieces come out of the woodwork....one success tends to beget speculation in the art market.
Posted by Patrick Sheehan at 7:33 PM