Royal Tiara On The Block At Sotheby's

I spent the latter part of the afternoon scouring the major auction house websites to find the highly anticipated June design sales. Unfortunately they will not drop until next week, but my inquiries did not leave me empty handed. Thankfully, it was on Sotheby's main page I came across this lovely emerald laden stunner. 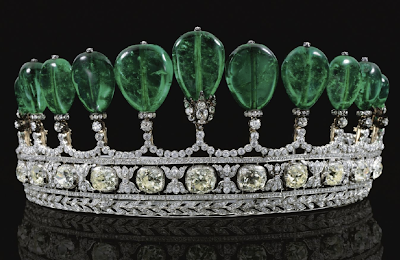 I must admit I was hesitant to write about another royal jewel so quickly after my coverage of the recent royal wedding. But I figured you may be up for a bit of sparkle this weekend. Sotheby's describes this aristocratic diadem as "A Magnificent and Rare Emerald and Diamond Tiara, Formerly in the Collection of Princess Katharina Henckel Von Donnersmarck, Circa 1900." The base of the tiara is of a lovely foliate design and par four the course as far as high-end Belle Epoque jewels go. However, it is the approximately 500 carats of polished emeralds comprising 11 pear shaped spikes that set it apart from the pack. 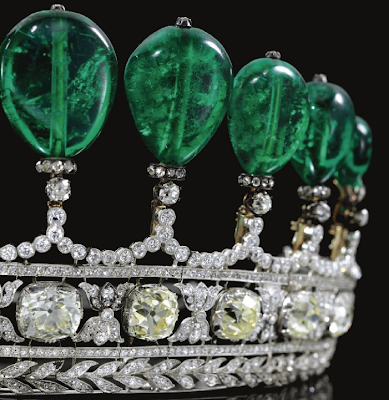 The catalogue goes to great, yet measured, lengths to assert that the emeralds
probably/ possibly/ perchance belonged to Empress Eugenie of France from a group of 25 such polished emerald drops sold from her personal collection in 1872. Historical layering such as this adds to the mystique and hopefully the end result but I am a stickler for hard facts and always find it a bit too fluffy when dealing with a masterwork that can really sand on its own, but hey that's just me. What is certain is that the emeralds are of Colombian origin and are polished in the Indian tradition, likely in the 17th or 18th century. While the overall effect is striking I have always found the mixing of globular cabochon stones and brilliant cut diamonds to be a tricky affair....lest they look like shiny gum balls wed to a refined base. The present lot is just on the cusp of looking top-heavy, but only just. Queen Elizabeth's Grand Duchess Vladimir tiara utilizing the Cambridge emeralds is a bit more successful but who is counting really....well I guess I am since it is one of my favorites from her collection. 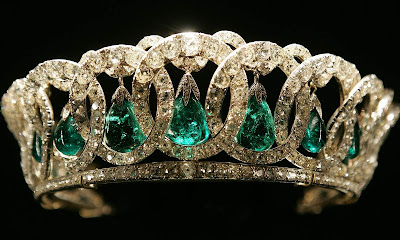 Queen Elizabeth's Grand Duchess Vladimir Tiara
The catalogue also asserts that the tiara is (yet again) "possibly" the most important to appear at auction in 30 years (since it was last sold by the heirs of Princess Katharina Henckel Von Donnersmarck via Sotheby's Zurich in 1979). This glosses over Christie's great success selling the fabled Portland tiara just last December and the Poltimore tiara that they sold from the Estate of Princess Margaret in 2006. 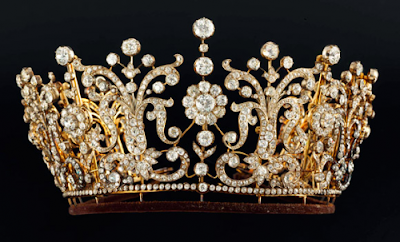 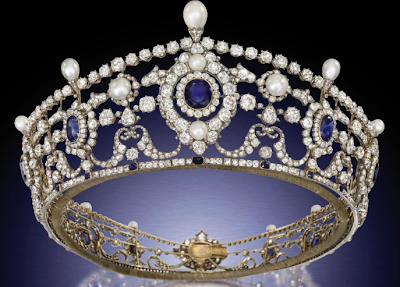 The Portland Tiara Sold Christie's 1 December 2010 ($1,188,239)
Granted, the Donnersmarck tiara with its 11 large emeralds may pack more of a punch in intrinsic value, but the importance of the provenance is debatable when compared to the Portland or the Poltimore. That said, I wish Sotheby's well as the estimate range is a stellar $5.3-10.6 million. We will have to wait until next week to see where it ultimately lands. I leave you with this press image which gives you a better sense of the tiara's scale and the greater distance obscures the natural imperfections in the in the emeralds which can be distracting when viewed too closely. 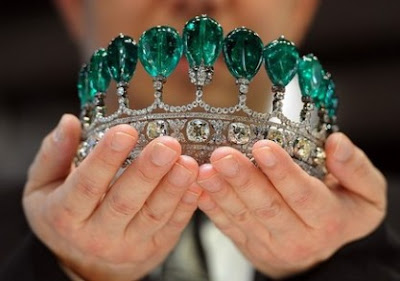 UPDATE: The tiara sold on May 17th for an astounding $12.7 million becoming the most expensive tiara ever sold...
Posted by Patrick Sheehan at 6:43 PM